In our microcosm, the release of a new pinball machine is always an event in itself. Even if I’m a fan boy (or not) of Stern, who reigns supreme over our hobby, I’m always vigilant, attentive and ready to defend any project of more modest or even unknown entrepreneurs. I am sincerely convinced that this is a driving force for our passion and allows a questioning (normally) of the giants who can tend to rest on their laurels.

So it’s with a feeling of impatience mixed with curiosity that I was waiting for the official incursion of American Pinball’s North American conquerors. And it is indeed Legend of Valhalla (LOV) which will be available soon.

But here’s the thing, the next American Pinball title is a subject that has been debated in the editorial staff for several months already. Some people (including myself) think that it is imperative to have a strong and powerful license to get American Pinball out of bad sales results, while others (including myself, yes I eat from all racks), think that it is an original creation that would break everything.

American Pinball seems to have leaned toward the latter, except that… The promise of a barbarian invasion in Pinhead land turns into a shipwreck before it reaches the coast.

One upon a time in North America…

A little history: LOV is the fourth official pinball game from American Pinball. However, LOV was originally a homebrew pinball game produced by a small collective called Riot Pinball. They sold the concept and the rights to American Pinball that manufactures it on their production lines, markets it and sells it through their network of authorized distributors.

Before him, American Pinball had used the license card with its Hot Wheels. A really nice pinball machine but unfortunately a bit out of touch with the franchise and quite empty on the playfield.

In comparison, the Houdini machine (American Pinball’s first production) is, in my opinion, their best pinball machine both in terms of “world under glass” and in terms of originality and innovation in manufacturing.

Oktoberfest (second production of American Pinball) is also a good pinball game with a nice set but… You have to like the teutonic side of the theme, not to say a bit of a hick.

As you can see, until now, American Pinball has not really convinced us. However, we have to acknowledge their great quality of manufacture, their reliability and their will to do well every time. In short, let’s highlight their intellectual and commercial honesty. Unfortunately, that’s not sufficient.

Who wants to be King ?

Well, we know that communication is never the strong point of manufacturers (except for the launch of the Guns n Roses by Jersey Jack Pinball). So, the presentation video is out (incomprehensible in terms of contemporary marketing) and the traditional good old flyer of the 90’s concerts with two or three close-up pictures is in place…

At first sight, the American Pinball machine is rather attractive: a plexiglass topper (a little light) is proudly displayed above the front panel, easily recognizable by all, and the LCD screen is well integrated. Stern’s teachings have paid off and the Deluxe version that is presented (equivalent to Stern’s Limited Edition) has a nice gold finish on the armor blades and on the feet. The clamping bolts are still much nicer than those of all the manufacturers on the market.

Another original feature is that the pinball machine has three pinball buttons for three pinball machines on the board but the third button is not on the side of the third pinball machine. Yes, I know, it’s a bit cumbersome to write and it’s a lot of “pinball” times, but I sacrificed style for the sake of precision and clarity. We bet that this button has another use in the gameplay, a bit like the lockbar button in Stern.

Graphically, from a distance, we can see Viking warriors ready to fight with any pinhead who dares to approach the machine. Still from a distance, the set shows a glimpse of people on the playfield after the opening of the gates of Valhalla.

Overall, what we are given to see is therefore rather convincing. But then, where is the problem?

A pinball machine beautiful from afar but far from being beautiful…

When we get closer to the pinball machine, we notice two things that would make our warm winter on this crazy planet look like a Fimbulvetr (editor’s note: winter heralding the Ragnarök, the end of times for our merry northern friends).

The first one is a frankly uneven or even questionable artwork… Indeed, if the legendary animals like Fenrir, Jörmungand or Lyngbakr, respectively the big wolf and the big snake on the plastics of the inlane and the big octopus (Kraken) in front of the drakkar, are of correct design, it is not the case for the viking on the plate. While the skull in front of the outhole and the apron is well done.

If you wonder how I know the name of these creatures, you should know that your humble servant has been in the metal world for several years as a singer. On the tours, we meet very nice people, among which some black metallers who explain you the origin of their band name.

I’m taking over the design.

But first of all, a clarification to understand what I am talking about. I’m not a fan, but not at all, of “cancel culture” (if you don’t know what it is, ask a teenager, they’ll explain it to you). However, putting on the box a woman bathed in her blood, murdered by a big brute who seems happy with his thing, I don’t think it’s the best thing to do for a machine that will end up in a living room or a gameroom. I’m not a sensitive person (though) but I still prefer the intellectual challenge to the mediocre simplicity of clichés. So basically, I’m not asked for my opinion, but I give it anyway: I would have done otherwise 🙂

The second point. And here frankly all the editorial staff wondered if it was a joke or not: what the hell are these toys? Odin (if it’s really him) above the central ramp is anything but worthy of a professional manufacturer’s production. It looks like a guy in his garage who makes 3D printers and who gave the figure to his 9 years old child to paint. Same for the pile of skulls on the left shoot. Only Mjöllnir seems to stand out.

The drakkar, which is the main toy of the pinball machine, is confusing… It is in my opinion less beautiful than the one presented in 2020 during the prototype version. The manufacturer tells us that the shields are hand painted, which is supposed to be a guarantee of quality but the result is not there. In short, it doesn’t seem to favor the creation of the world under glass so dear to the whole editorial staff of Pinball Mag.

On the positive side, American Pinball seems to have progressed in terms of “animation”. This remains in quotation marks because it is more illustrations than real 2D or 3D animations.

On the other hand, the illustrations lack coherence. They don’t match the graphics of the board or at least not in their entirety. The quality is however superior. So why not use the same designer?

Moreover, the emphasis should be on the field. The rest should only serve to reinforce the immersion. Once again and unfortunately, here there is not much under the glass to make a magical universe live, even on the Deluxe version:

We do not even mention the rest as we find it ridiculous that manufacturers still communicate on it as if it was exceptional. Like: ” 100 leds RGB, 2 spots, 12 flashes, professional dubbing, etc…) A bit like if a car manufacturer communicated like this: a steering wheel, four wheels, two seats installed by hand in the front, a nice paint, a colored dashboard,…

The Deluxe version features the participation of Two Steps from Hell, a duo specialized in epic soundtracks for movies, gaming studios and trailers of all kinds.

American Pinball specifies that its Deluxe version will be limited to 300 copies.

As for the gameplay, we will of course have the opportunity to put our hands on it and we will tell you about it in our final test. So will the 22 game modes, including 8 multiball modes, make the difference?

Let’s face it, this new machine from American Pinball doesn’t look good. We WANT TO BELIEVE! We want to support all the players in this fabulous hobby, but we need more courage and audacity from the underdogs to make a real difference. And damn it! Please announce your machines with quality videos, original, beautiful photos of links to your sites. Because, at the time I write these lines, that is to say four days after the announcement, no photo level description of the machine is online on the official site of American Pinball…

Maybe it’s because this pinball game was developed externally by Riot Pinball? This would also explain that in the technical team there are more or less two guys working on it. This could explain why this machine, under the guise of professionalism, is in reality a true amateurism in its launch and realization.

But! But! As I write this, American Pinball announces that they are increasing production of their deluxe version to 500 units. And they are already sold out! So what’s up? Am I completely off the mark? Verdict at the time of the test because : I want to believe ! 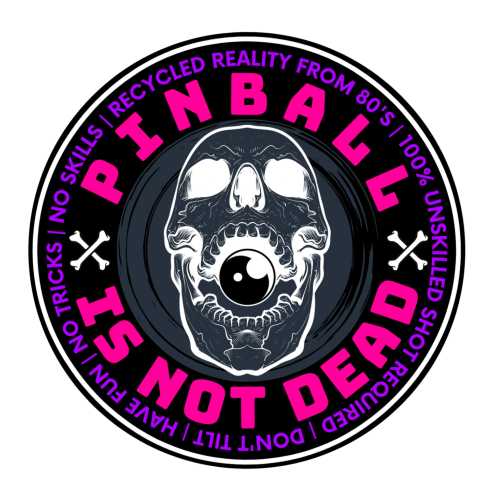